Skip to content
Cryptocurrencies are unregulated in the UK. The value of assets can rise or fall. Profits may be subject to Capital Gains Tax.

BitConnect (BCC) was a cryptocurrency which launched on 15th November 2016 which was owned and operated by Ken Fitzsimmons in the UK. This was likely someone who just stood in, providing anonymity, for the real people behind the company. In September 2017, more entities have appeared in Company House UK records.

If you cut through the bullshit, BitConnect claimed that they could generate daily returns of between 0.5% and 1% by using their trading bot to take advantage of Bitcoin’s (BTC) volatility. In October 2017, they reported an average daily return of 0.89% over the previous 6 months. This claim was not supported by any evidence whatsoever.

Interest was accrued daily and deposited into your BitConnect account every 24 hours. These returns are immediately accessible and can be re-invested or withdrawn (0.005 BTC minimum withdrawal). This means that your accrued interest payments should cover your initial capital investment after about 100 days – regardless of how much you invest.

Prior to BitConnect’s collapse, they announced that they were releasing a BitConnect debit card which could be loaded with BitConnect and Bitcoin. They also released two BitConnect themed music videos (below is one) and had planned to release a full album.

Despite opening an account to understand the BitConnect platform, I invested absolutely nothing into it. There were red flags everywhere which were screaming to stay away.

I wasn’t alone in seeing these red flags. Some popular cryptocurrency YouTubers had expressed their concerns too. Expand the sections below to go through these.

Review by DataDash. Makes observations that:

Is Bitconnect a Scam?

Review by BoxMining. Makes observations that:

David Hay starts his review of BitConnect by offering a $1000 bounty to anyone that can prove that the trading bot is doing what it says its doing. Makes observations that:

In any case, I’ll go through three of these points in a little more detail below.

A recurrent concern I encountered in my research before BitConnect’s collapse was that no evidence that this trading bot actually existed was ever published.

Some limited amount of trade history (showing buy and sell orders) would have been enough to dismiss a lot of this scepticism. The closest thing I found (which wasn’t good enough) was the ‘Lending Profit Chart’. While this showed the daily returns generated by the trading bot, it didn’t prove that it was actually generating these returns. 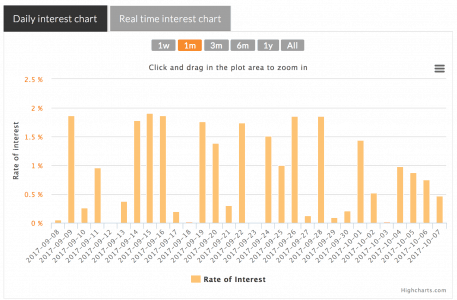 If you had it, why wouldn’t you release a limited amount of trading data? It would have been fantastic marketing and stopped all the naysayers in their tracks. What reason could they have had for not publishing it?

BCCponzi sourced a screenshot in October 2017 from an anonymous source (shown below) who infiltrated a private Facebook group for top BitConnect promoters. In this conversation, Craig Grant (a top BitConnect promoter in the US) admits that the trading bot is “just a story” and that (whoever he was talking to) shouldn’t “get lost with imaginary bots”.

For the ‘Bitconnect volatility trading bot’ believers, this says Craig Grant (the top US promoter) in a FB group for promoters about the bot pic.twitter.com/1tn5fFoTna

Depending on how much you invested, your initial funds were tied up for between 120 to 299 days. By itself, a lock-in period is not my concern. Instead, it’s that your initial investment is locked up for at least 120 days (and that’s only if you invest $10,010 or more).

Why was a lock-in period necessary?

It was necessary for a lock-in period to exist so that there was enough capital from new investors to subsidise the payments of existing investors who have reached the end of the lock-in period.

Wouldn’t it surely have been a better endorsement of the platform if the lock-in period was lower?

It would have been a better endorsement of the platform if the lock-in period was lower. This would likely have given existing investors more confidence (possibly leading to higher investments) and encouraged more new investors to try out their system (who might have had some doubts/concerns).

Why were capital release periods (and extra interest) tied to lending amount?

Whenever someone used a referral link which you provided them, you earned 7% of whatever they invested into BitConnect. And if those people referred someone who then lends on the platform, you earned commission through them – but slightly less. As you can see below, this goes on and on.

Affiliate programs, by themselves, aren’t a bad thing. They incentivise existing users to spread information about products/services and can be a cheap and effective customer acquisition method. PayPal had a long-running and successful affiliate program to increase new user uptake. Coinbase currently has an affiliate program too.

However, the model employed by BitConnect was lucrative enough that it encouraged negative behaviour.

To put into perspective how lucrative this affiliate program was, this tweet highlights that one promoter had earned $900,000 from referring people to BitConnect.

Check out @CryptoNickk telling his audience he’s not a bitconnect promoter in his latest video, meanwhile pulling in close to a million in affiliate commissions🤔 https://t.co/PRBKnOEAjf pic.twitter.com/qydMwAWSsG

How Did BitConnect Really Work?

When I originally wrote this post in October 2017, I thought that the various warnings signs indicated that BitConnect worked something like this:

In other words? Exactly like a Ponzi scheme. It would keep going for as long as BitConnect was able to subsidise payouts to existing investors through increased adoption.

What Happened to BitConnect?

Here’s why BitConnect announced that they were closing their lending and exchange platform on 16th January 2018.

None of these reasons should substantiate closing their platform:

When they issued their announcement on 16th January 2018, here’s what happened:

Because the value of BitConnect is tied to the success of their lending platform, it was rendered completely worthless. Anyone who had BitConnect wanted to immediately exchange it for Bitcoin.

But there wasn’t anyone looking to buy BitConnect. Everyone knew it was worthless. Subsequently, we saw the price tumble about 87%.

To put this in perspective, a user who was returned $1000 worth of BitConnect would only have been able to exchange their coins for about $130 in Bitcoin.

Sometime after Bitconnect’s announcement, /r/BitConnect temporarily went private. It has since been made public again, but submissions are no longer permitted. Given how many people were impacted by this Ponzi scheme, one of the top threads was a suicide hotline number. 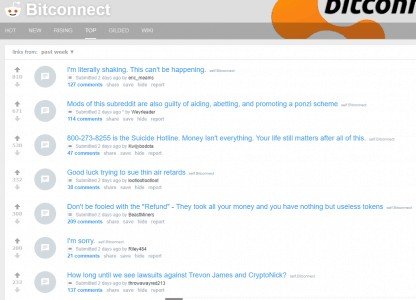 There’s another subreddit over at /r/BCC (which does allow submissions) which is serving as a forum for those impacted by BitConnect’s exit, but it’s just more of the same.

Most people who ever promoted BitConnect looked to distance themselves from it by taking down BitConnect-related videos, disappearing, or pivoting to promote some other scam coin. You can find a list of YouTubers who have previously, or continue to, advocate suspected scams in this Reddit thread. 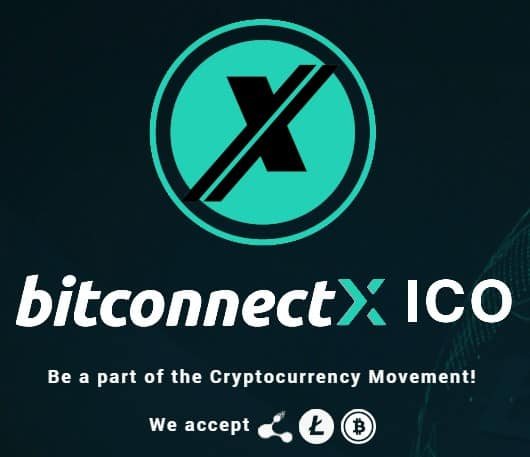 BitConnect released an update on the 17th January 2018 where they extended a poisoned olive branch to the people they’d fucked over. For the next 10 days, they were allowing you to participate in the BitConnect X ICO at a rate of $150 per BitConnect (if you’re outside the USA).

While this represented a substantial premium over the market price at the time, it was just another scam. BitConnect X wanted to raise $500 million. Thankfully, they were not successful and this never went anywhere.

BitConnect is dead, but the success of BitConnect prompted numerous copycats (i.e. clones).

There’s a long list of crypto Ponzi and pyramid schemes that someone put together on Reddit back in 2017. Expand the sections below to learn about just a few of the more ridiculous ones I researched a few years ago.

A straight-up clone of BitConnect, with a lending system which offered up to 48% returns per month and an affiliate program which gave people a strong incentive to recommend the service (you receive 8% whenever someone you directly refer lends on the platform). 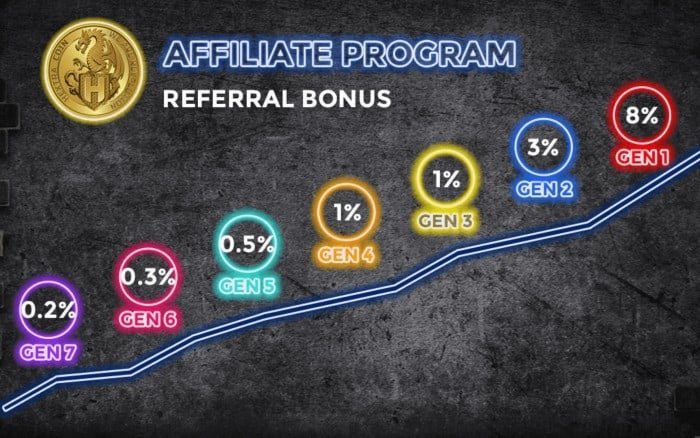 The below is taken from their whitepaper. I wish I was joking.

Designed just like BitConnect, this offered returns of up to 1% per day (plus more if you ‘invest’ more). Offered a referral system, with an ‘elite tier’ for YouTube promoters.

EthConnect claimed you could get returns of up to 52% per month and have a juicy referral system.

As shown below, they’re not even shy about mentioning that they’re a Ponzi scheme! 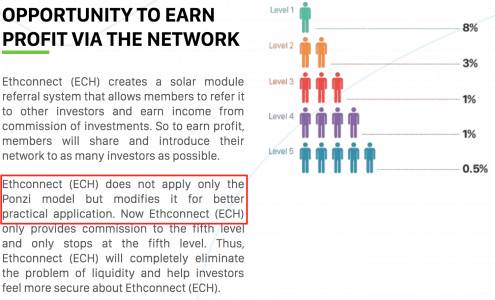 Why did you bother writing this?

In 2017, BitConnect’s presence in the top 15 (by market capitalisation) of all cryptocurrencies was worrying, as it lent it credibility – where, as I hope I’ve shown – it didn’t deserve.

When I first published this in October 2017, there was an overwhelming number of positive reviews of BitConnect. I just wanted to add my voice to the naysayers and maybe get other people asking the same questions I was.

I didn’t doubt that BitConnect was a scam, but a part of me hoped I was wrong because of how much it would financially destroy those who had put their money into it.

Have Something to Add?

Did I miss something? Or did I make a mistake?

Let me know in the comments below.