Litecoin (LTC) is the fifth-largest cryptocurrency network, with a market capitalization of over $5bn. It was forked from Bitcoin (BTC) in late 2011 and is designed to be quicker and cheaper to transfer.

In 2022, it’s possible to get Litecoin (LTC) in lots of places at competitive rates directly with GBP.

But it’s still easy to get ripped off.

In this post, I’ll show you the cheapest way to buy Litecoin (LTC) in the UK with a UK bank transfer, a debit card, a credit card, or any other payment method.

Don’t care about the details?

Here’s an overview of the cheapest places to buy Litecoin (LTC) in the UK with the 3 most popular methods.

Buying Litecoin (LTC) with Bitcoin (BTC) in the UK

This post is about how to buy Litecoin (LTC) directly with GBP in the UK.

If you want to buy Litecoin (LTC) with Bitcoin (BTC), then you’ll want to check out this list of the best places to buy Bitcoin (BTC) in the UK.

Once you have Bitcoin (BTC), you can exchange it for Litecoin (LTC) in loads of places.

Here are just a few options:

Best Ways to Buy Litecoin in the UK

Coinbase Pro is one of the cheapest and quickest ways to buy Litecoin (LTC) in the UK.

Coinbase Pro was the 1st major cryptocurrency exchange to accept GBP deposits through the UK Faster Payments Service (FPS). This means deposits to Coinbase Pro will usually be credited in less than an hour. However, I’ve found that Coinbasde Pro has consistently processed my GBP deposits within minutes (after my initial deposit).

On Coinbase Pro, you can buy Litecoin (LTC) at the REAL market rate while incurring barely any fees. You’ll pay just fees of up to 0.5%, regardless of whether you’re a market maker or a market taker.

Fees to withdraw your Litecoin (LTC) from Coinbase Pro to somewhere else (e.g., a hardware wallet) don’t cost much either.

What’s the difference between a market maker and taker?

A market maker is someone who provides liquidity to markets.

This is done when you submit a limit order (buy or sell) on Coinbase Pro (or other cryptocurrency exchanges) that doesn’t immediately fill. These orders sit on the order book and prevent wild fluctuations in cryptocurrency prices. For this reason, market makers are incentivized by reduced fees on exchanges.

When you submit a market order (buy or sell) on a cryptocurrency exchange that immediately fills, you are a market taker. For this added convenience, you’ll pay a slightly higher fee than market makers on some exchanges.

What’s the difference between Coinbase and Coinbase Pro?

Coinbase and Coinbase Pro (formerly GDAX) are owned by the same company. When you create a Coinbase account, you’ll able to use your Coinbase credentials to access Coinbase Pro.

Coinbase is a popular cryptocurrency broker which is intuitive, easy-to-use, and perfect for beginners. You can buy supported cryptocurrencies with a debit card, credit card, and UK bank transfer on Coinbase. You can learn more in my Coinbase review.

In the long-term? It’s worth learning to use Coinbase Pro. Once you’ve used it a few times, you’ll probably prefer it over Coinbase – I know I do!

For a more in-depth comparison of the differences, check out my Coinbase vs Coinbase Pro post.

CoinJar is a cryptocurrency platform (founded in 2013) where you can buy, sell, and store Litecoin (LTC). It also supports a number of other cryptocurrencies – like Stellar (XLM), Ripple (XRP), and Chainlink (LINK).

You can deposit GBP into CoinJar with a UK bank transfer, or instantly buy Litecoin (LTC) with a debit card.

CoinJar supports UK Faster Payments. So while your first deposit might take a little longer to process, subsequent deposits should usually be credited on CoinJar within minutes of you sending them. This is pretty awesome.

CoinJar charges a fee of just 1% when buying or selling any cryptocurrency on its platform. The Litecoin (LTC) prices you’re quoted are based on the best available price on the CoinJar Exchange. When I’ve checked recently, I’ve found that it’s near-enough the real exchange rate.

Read my review or head over to their website to learn more.

Litecoinlocal.net is a peer-to-peer (P2P) marketplace where you can buy and sell Litecoin (LTC) with other people. It’s available across over 100 countries and supports lots of traditional (i.e. fiat) currencies.

Although it supports many popular payment methods (e.g. PayPal, Cash, Western Union), there were only 3 sellers in the UK when I checked.

The lowest rate I found was more than 11% above the real LTC/GBP exchange rate too.

Unless you’re dead-set on buying Litecoin (LTC) with PayPal, cash, or a less common payment method, then I’d just use one of the options described above. You’re throwing away money if you pay these kinds of rates.

Just like any other altcoin, you’ll need a cryptocurrency wallet to store your Litecoin (LTC). 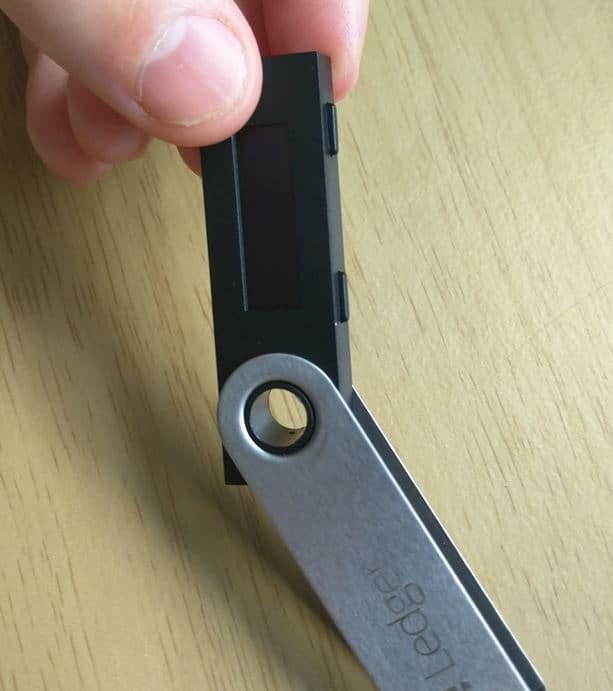 One of my favourites and highest-ranked hardware wallets is the Ledger Nano S.

It continues to support more and more cryptocurrencies and can be bought from the manufacturer’s official website for less than £60 (incl. delivery).

Not an exhaustive list, but these options seem quite well-recommended across the Litecoin community:

What is Litecoin (LTC)?

Litecoin (LTC) is the native cryptocurrency for the open-source Litecoin network. It was originally developed using the same framework that powers the Bitcoin network – but has a few changes that make transactions faster and cheaper.

Founded in 2011, Litecoin was the brainchild of Charlie Lee, a software engineer and early crypto adopter. Litecoin (LTC) was one of the first alternative cryptocurrencies, or altcoins, in the world. In fact, it predates one of Bitcoin’s other major competitors, Ethereum (ETH), by four years.

Here’s a short video that explains what Litecoin (LTC) is, how it works, and what makes it unique:

Since Charlie Lee designed the Litecoin network as a direct response to what he believed were major shortcomings of Bitcoin (BTC), the best way to understand what makes Litecoin (LTC) special is to consider it in comparison to its original competitor: Bitcoin (BTC).

Litecoin (LTC) was created by modifying the code to Bitcoin (BTC). As a result, the Litecoin network operates in much the same way as the Bitcoin network.

There are many similarities between the two networks, but the biggest feature that Bitcoin and Litecoin share is their Proof-of-Work (PoW) consensus mechanism. This means that anyone that wants to mine Litecoin (LTC) or Bitcoin (BTC) needs to solve a computational problem in order to add a new block to the blockchain (and earn mining fees).

But Litecoin (LTC) isn’t simply a carbon copy of Bitcoin (BTC). There are some key differences between the two networks, including:

What are the benefits of holding Litecoin (LTC)?

Litecoin currently brands itself as “the cryptocurrency for payments”. The network’s very fast and very affordable payments make it a potentially powerful tool for anyone that wants to quickly send money across the world or pay for goods and services using crypto.

Outside of its functionality as a payment method, there aren’t too many other popular uses for Litecoin (LTC).

Since the Litecoin network operates on a Proof-of-Work (PoW) consensus mechanism, there’s no way to directly stake LTC on the network to earn rewards.

However, many centralised exchanges and centralised finance (CeFi) platforms now offer interest on Litecoin (LTC) that you deposit in a custodial wallet. But while this is a potential way to earn passive income on your LTC holdings, it can be extremely risky.

Looking to buy other cryptocurrencies?

Check out my other popular guides: