The Ellipal Titan is the flagship crypto hardware wallet from the Hong Kong-based manufacturer, Ellipal. It features a full-colour touchscreen and it claims to be fully air-gapped device.

But is the Ellipal Titan really all that it claims to be? Is it truly air-gapped? And is it worth the high price tag?

In this Ellipal Titan review, I’ll walk through everything that this wallet has to offer. I’ll discuss its design, security features, pros, and cons, to help you determine if it’s suitable for your crypto.

This is fairly expensive for a hardware wallet, but it’s still more affordable than some other high-end devices.

Here’s how it compares:

You can order the Titan from Ellipal’s online store and from other retailers, such as Amazon.

This includes major coins such as:

You can also use the Ellipal Titan to store the private keys to more than 10,000 ERC-20, BSC, TRX, and HECO tokens.

Check out Ellipal’s list of supported cryptocurrencies to learn more. 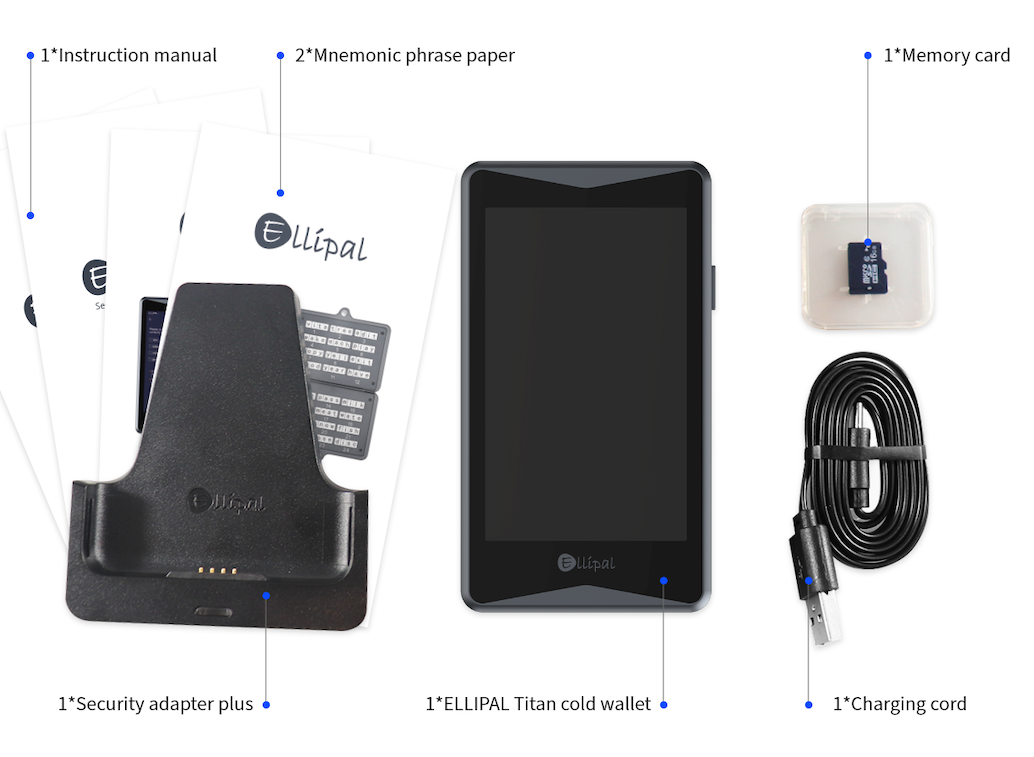 When you order an Ellipal Titan, your wallet will come in a compact box that’s wrapped in plastic.

Inside the box, you’ll find:

Note that the wallet features a tamper-evident security sticker that should be in place when you receive your Ellipal Titan. 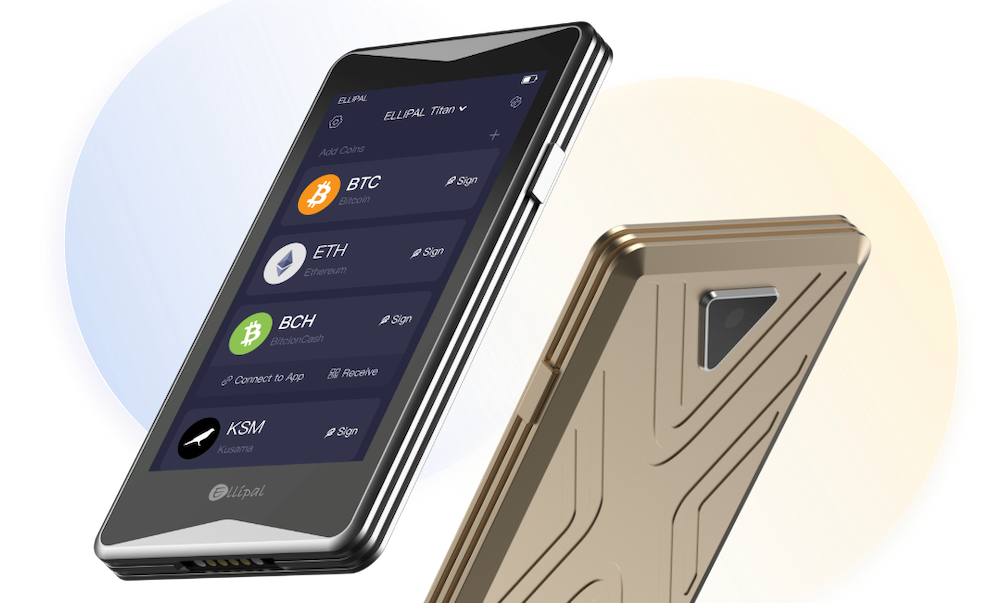 This is very large for a crypto hardware wallet. In fact, it puts the Titan more in line size-wise with a standard smartphone than it does with other hardware wallets.

If you wanted a hardware wallet that you could carry around in your pocket, the Ellipal Titan probably isn’t right for you. But if you’re looking for a wallet that you can keep at home for long-term crypto storage, the Titan might be a good choice.

One area where the Ellipal Titan stands out is in its large screen size. The Titan is built much like a smartphone in that it has a long, thin, rectangular body with a huge screen on one side.

Its LCD screen measures 88 x 49 mm, which is just a bit smaller than the 131 x 64 mm screen you get on the iPhone 13 mini. Plus, the large screen on the Ellipal Titan is a touchscreen, so reading wallet addresses and confirming transactions is as easy as it gets.

On the backside of the Ellipal Titan, you’ll also find a 5-megapixel camera. This camera is used to scan QR codes on the Ellipal mobile app so that the wallet never has to connect to the internet. You can control the camera using the device’s touchscreen, too.

Ellipal states that the Titan is built fully out of aluminium except for its LCD screen. Although this is one of the reasons why the Titan is fairly heavy for a hardware wallet, it does offer a lot of benefits over plastic as far as durability is concerned.

Since the Titan isn’t really designed for everyday carry, durability isn’t a huge concern. However, the device’s large screen size does mean that it’s more prone to scratches than something with a small screen like the CoolWallet S. 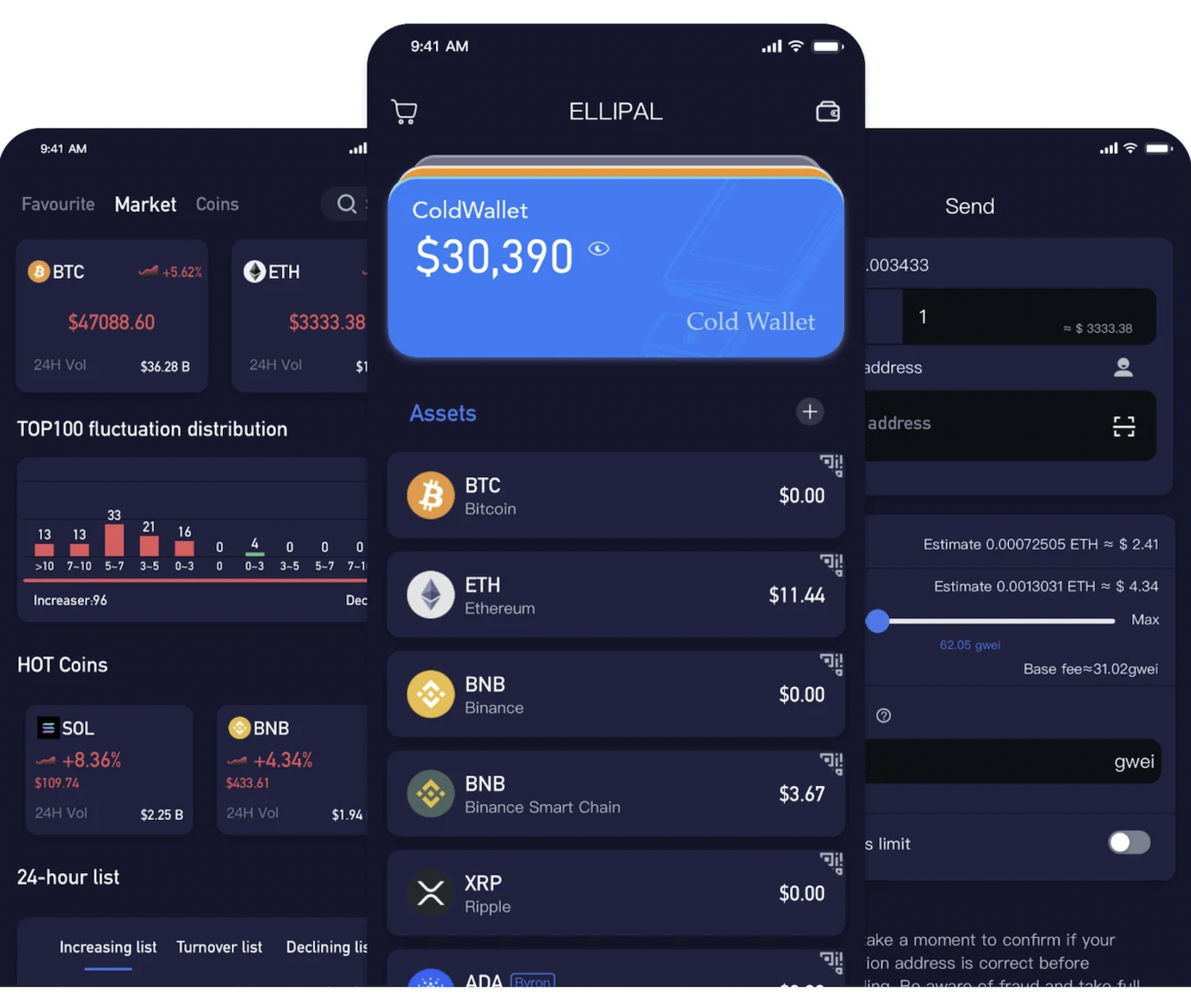 Like all crypto hardware wallets, the Ellipal Titan is solely designed to be a secure place to store the private keys to your crypto. If you want to send crypto or verify your wallet addresses, you need to connect your device to a wallet interface.

The Titan’s wallet interface is the Ellipal Mobile App, which is available on the Apple App and Google Play stores. It gets high ratings on both iOS and Android thanks to its clean interface and user-friendly design.

Ellipal designed the Titan to be completely air-gapped, so the only way to send information back and forth from your device to the mobile app is by scanning QR codes. You can also protect the wallet interface by requiring either one or two passwords.

Once you’ve logged in to the Ellipal Mobile App, you can take advantage of its many features, which include:

Unfortunately, the Ellipal Titan doesn’t currently have an official web or desktop-based wallet interface, so you’ll have to use a smartphone to interact with your wallet.

But the Titan does support MetaMask and WalletConnect, which is a third-party software that you can use to access a wide range of DApps (decentralised apps).

Ellipal markets the titan as being a truly air-gapped and secure crypto wallet. But does it live up to the hype?

The reality is that Ellipal doesn’t provide much information about the security features of the Titan. What we do know is that the device has the following features:

The problem is that a lot of these security claims are really hard to verify. This is because we know very little about who’s behind Ellipal (the company originated from an Indiegogo campaign) besides that it’s based in Hong Kong.

While this isn’t necessarily a deal-breaker, it makes it hard to know if we can actually trust Ellipal and its security features.

But the bigger problem is that the software for the Titan is not completely open-source. Some of the source code for the Titan is on Github, but not all of it is. As a result, we have to trust that the wallet does what Ellipal says it does because it’s impossible to verify all of the company’s claims.

If you don’t like how large and cumbersome the Ellipal Titan is, consider the Ledger Nano S instead. The Ledger Nano S is one of the world’s most popular hardware wallets. It’s available for just a fraction of the price of the Titan and it’s about the size of a small USB stick. I particularly like the Nano S because its wallet interface, Ledger Live, is both powerful and super easy to use on mobile and desktop devices.

Check out my Ledger Nano S review for more information.

Or if you want a wallet with a touchscreen, check out the Trezor Model T. 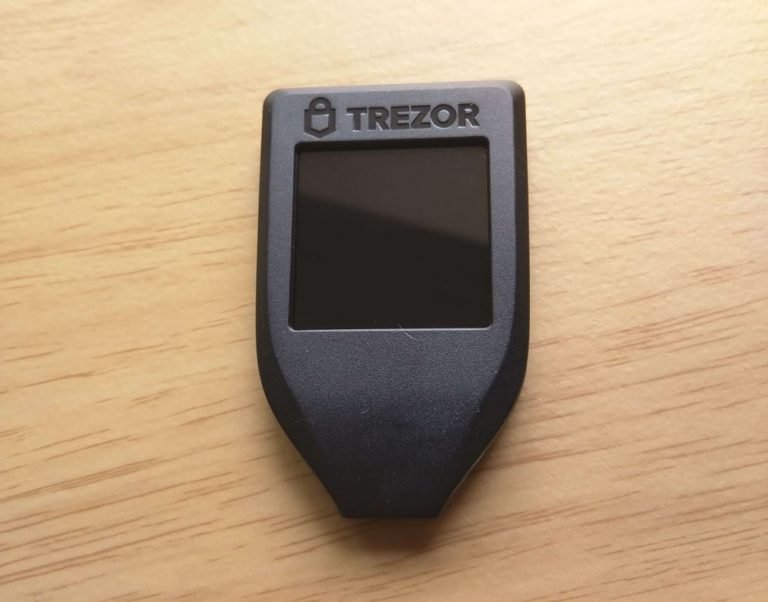 The Trezor Model T’s touchscreen is much smaller than what you get with the Titan, but it’s built on a wallet that runs fully open-source code. Trezor is also a much more established company, so the Model T is a reputable alternative to the Ellipal Titan, even if it’s much more expensive.

You can find out more in my Trezor Model T review.

The Ellipal Titan is a sleek and innovative addition to the crypto hardware wallet market thanks to its large touchscreen and novel design.

Some of the features that I like about the Titan include:

But I have some major reservations about the Titan, especially because its software isn’t fully open-source. The device is also both heavy and expensive. Plus, it doesn’t currently have a desktop-based interface, so you can only use it with your smartphone.

What Do You Think?

But what do you think about the Ellipal Titan?

Do you think its security features are up to snuff?