Even though it has been around since 2014, there aren’t many places where you can buy Vertcoin (VTC) in the UK.

In this guide, I’m going to quickly go through where you can get it.

Overview: Where Can You Buy Vertcoin in the UK?

The simplest and quickest option is to buy Vertcoin (VTC) using BC Bitcoin.

These are service-oriented cryptocurrency brokers who make it easy to get your hands on nearly any cryptocurrency you want – the notable exceptions being privacy coins like Monero (XMR) and Zcash (ZEC).

On the other hand, the cheapest way to buy Vertcoin (VTC) in the UK is via Bittrex on the VTC/BTC market. But because you can’t deposit GBP into Bittrex, you’re going to need to buy Bitcoin (BTC) elsewhere and send it over to Bittrex.

Vertcoin (VTC) is not currently available on any of the best cryptocurrency exchanges in the UK.

However, I spotted this tweet on the 1st February 2021 (so perhaps this will change soon).

Where else can I get Vertcoin (VTC) in the UK?

Although Bittylicious supports Vertcoin (VTC), I’ve not observed any sellers being available in the UK (at the time of writing). 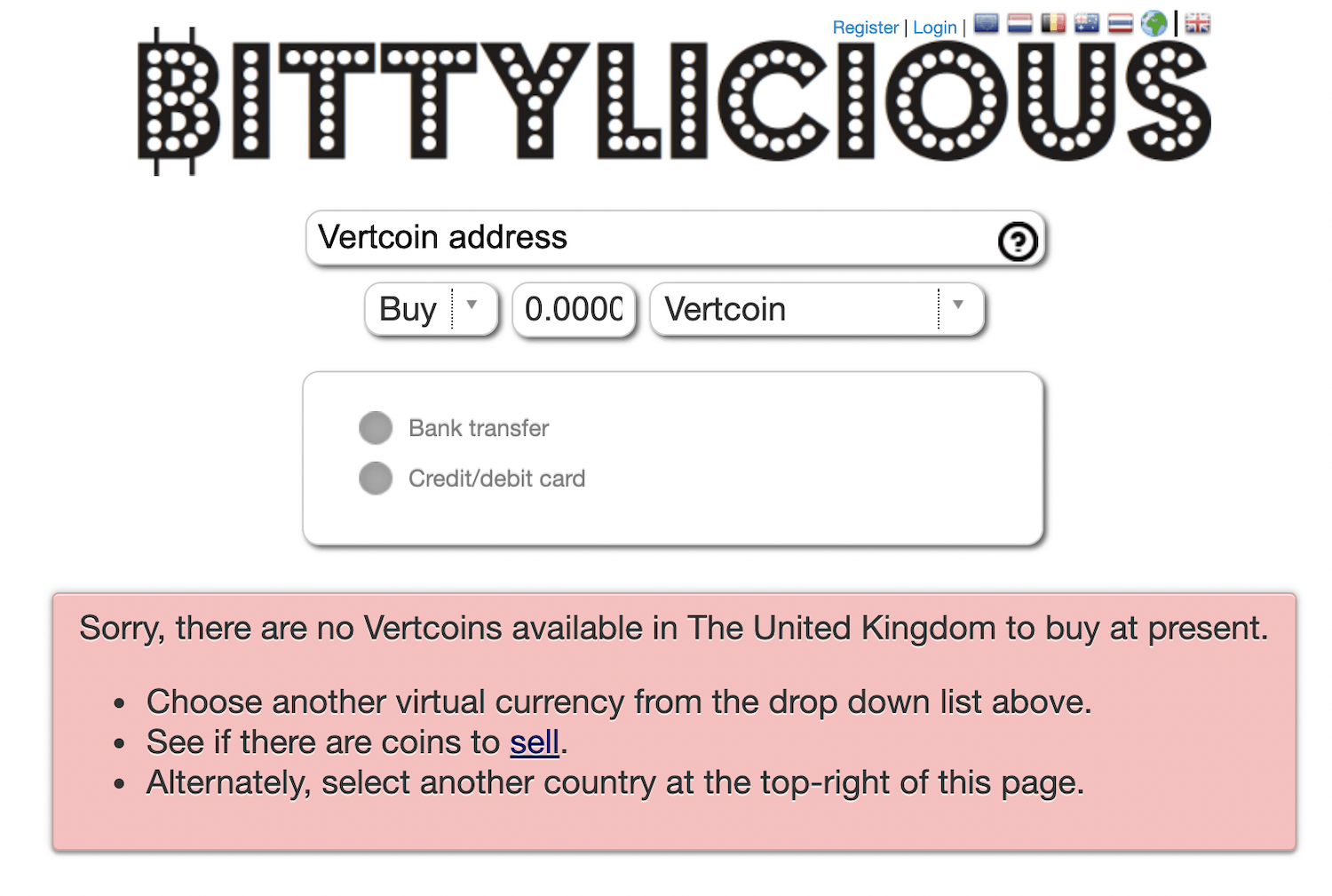 There’s also Bitvavo, which has a VTC/EUR trading pair. To make use of this cryptocurrency exchange, you’d have to deposit EUR using a SEPA bank transfer.

The advantage of this method is that it used to be cheaper (and less of a faff) than using a normal UK bank account. However, Revolut’s free plans are less generous than they used to be.

Buy Vertcoin (VTC) in the UK 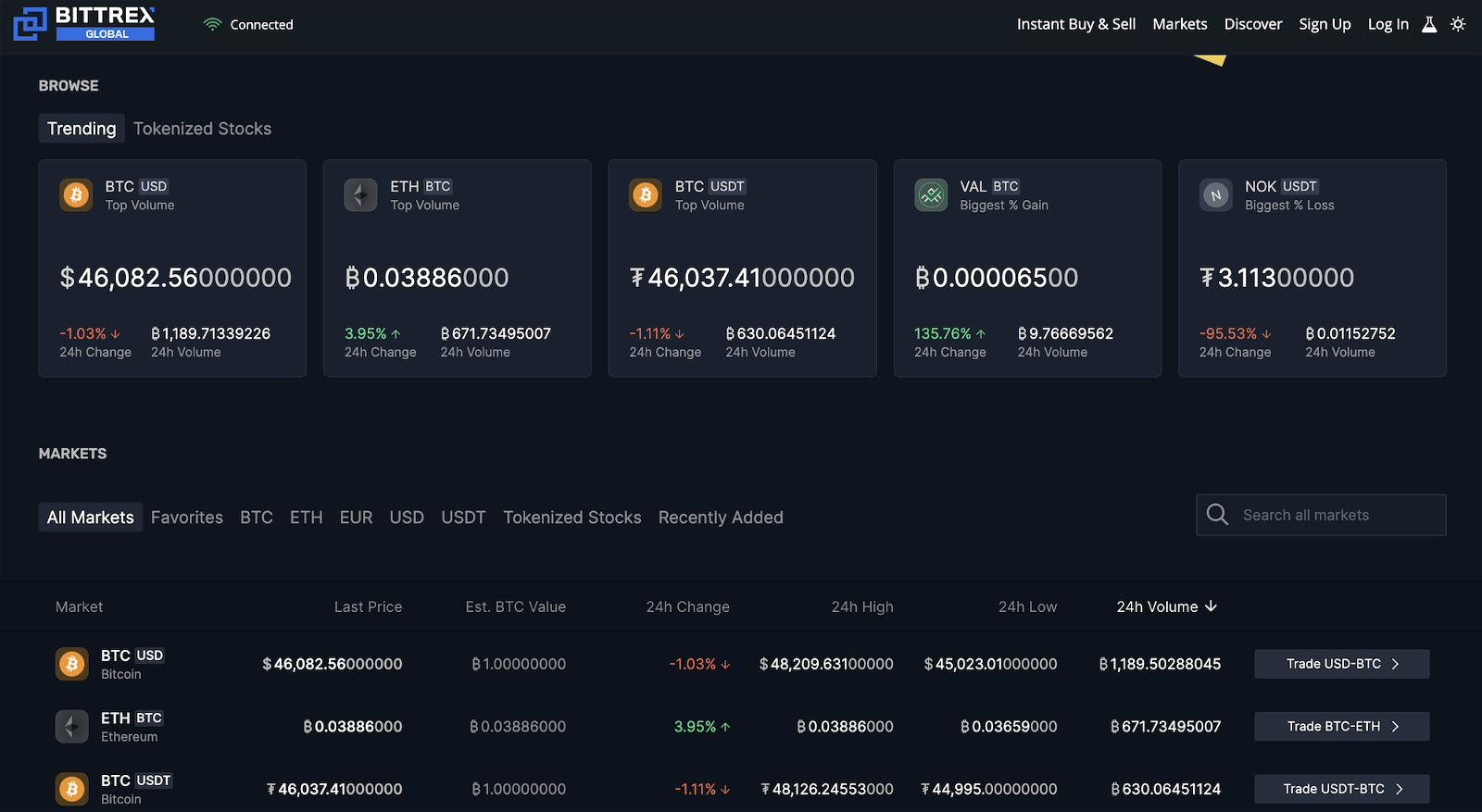 The cheapest way to buy Vertcoin (VTC) in the UK is by exchanging Bitcoin (BTC) for it on Bittrex.

Unfortunately, you’re not currently able to deposit GBP into Bittrex.

On top of this, the only Vertcoin (VTC) trading pair available on Bittrex is VTC/BTC.

This means you’ll need to:

Expand the sections below for more information.

In 2022, there are more places than ever before where you can buy Bitcoin (BTC) in the UK with GBP. Check out this list of some of the best ways.

At the time of writing this, lots of cryptocurrency exchanges and brokers are charging high fees when you transfer Bitcoin (BTC).

One of the best cryptocurrency exchanges with the lowest Bitcoin (BTC) withdrawal fees is Coinbase Pro.

Gemini Exchange also stands out here. That’s because they allow you to make 10 cryptocurrency withdrawal every month for FREE.

2. Send this Bitcoin (BTC) over to Bittrex.

Once you’ve got some Bitcoin (BTC), you need to send it over to Bittrex.

First up, you’ll need to login to Bittrex. If you’re not already registered, head over here to create one.

You’ll then need to send Bitcoin (BTC) to the receiving address provided by Bittrex.

You can find your Bittrex account’s Bitcoin (BTC) receiving address by:

To monitor the progress of your (BTC) deposit, select ‘Holdings’ in the navigation bar on Bittrex and then click the ‘Deposits’ tab.

Depending on the transaction fee paid by the exchange you’ve used, this could take hours (or even days) to be approved by Bittrex.

Once your Bitcoin (BTC) deposit has been credited, you’ll be ready to (finally) buy Vertcoin (VTC).

To do this, head over to the VTC/BTC market. You can find this by selecting ‘Markets’ in the navigation bar, scrolling down to the bottom, and searching for VTC. 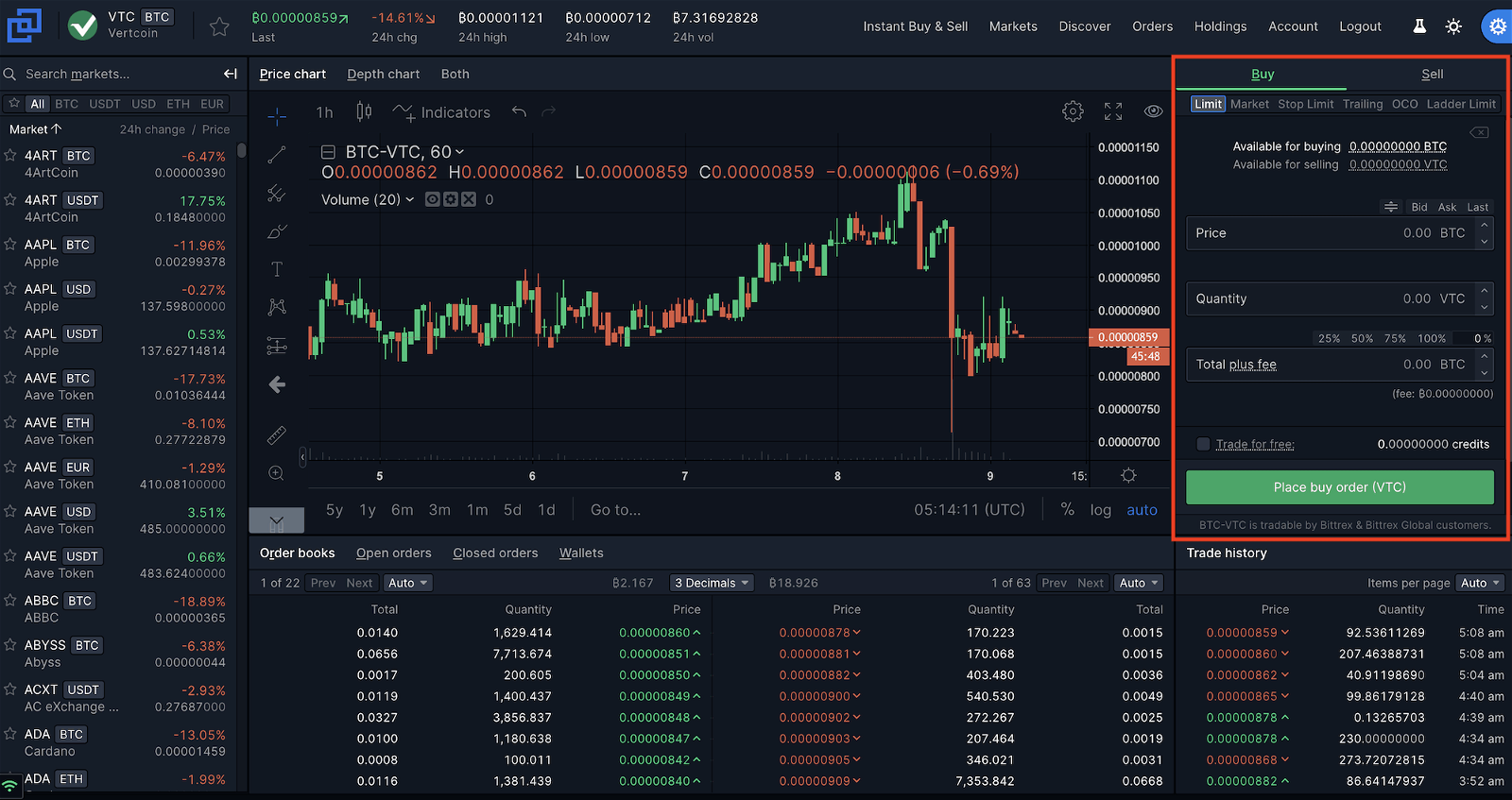 If all you care about is buying Vertcoin (VTC) at the current market price, then you can just submit a market order – which is fulfilled instantly.

If you only want to buy Vertcoin (VTC) at a specific price (e.g., if it dipped in price), then you can submit a limit order.

Although Bittrex has low trading fees, consider the other fees you’re paying when:

If you’re not careful, these fees can easily make this route more expensive than the alternative I’m about to dive into.

Another way that you can buy Vertcoin (VTC) in the UK is with BC Bitcoin.

BC Bitcoin supports a few payment methods, but your cheapest option is going to be a UK bank transfer. Because they support Faster Payments, your payment will usually be approved quickly.

When I checked, you couldn’t buy Vertcoin (VTC) through their web interface. This means you’ll have to contact them via their website, email, or over the phone to execute the order. 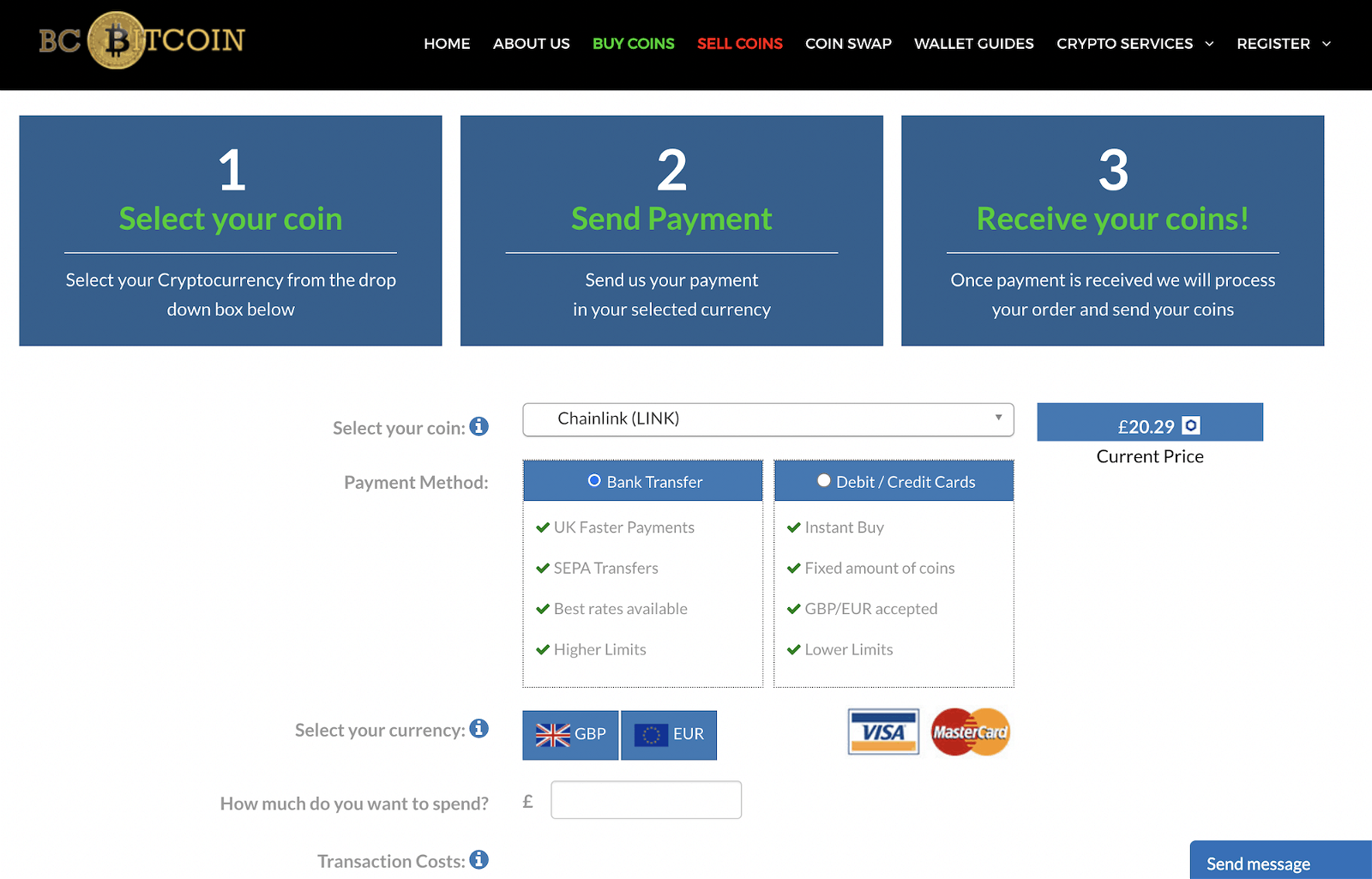 If you register with BC Bitcoin using this link, you’ll get access to exclusive discounted fees.

This means you’ll be only paying 3% in fees to buy Vertcoin (VTC) through BC Bitcoin with a UK bank transfer. This discount doesn’t apply to purchases made with a credit or debit card, as I’ve been told the processing fees are significantly higher.

If you don’t register via quickpenguin.net, then you’ll pay an extra 2% in fees when buying Vertcoin (VTC) on BC Bitcoin with a UK bank transfer.

While it can work out more expensive than using Bittrex, the process of buying Vertcoin (VTC) using them is quicker, easier, and simpler.

What Is Vertcoin (VTC)?

Vertcoin (VTC) is an open-source proof-of-work (PoW) cryptocurrency that was created in January 2014.

It’s “built using Bitcoin as a base”. However, there are some critical differences:

The core thing that the Vertcoin (VTC) development team have committed to is long-term ASIC resistance. In short, this means that they want GPUs to remain a feasible option for mining Vertcoin (VTC). The aim of this is to ensure that the network remains decentralised.

To increase adoption, they’ve developed a simple one-click miner. If you have a graphics card and want to give it a shot, check out my guide here.

This has meant that multiple algorithm changes have been required since it was created. The most recent one occurred on the 30th January 2021 after ASIC miners began to dominate the hashrate.

The Vertcoin Hard Fork From Lyra2REv3 to Verthash was successful! Vertcoin would like to welcome miners to a brand new algorithm in the GPU Mining space.#Vertcoin $VTC #Verthash #GPU #Mining #cyrptocurrency #Crypto #cryptotwitter pic.twitter.com/d1V4i1Inah

Here are some places where you can find out more about Vertcoin (VTC) and engage with the community: 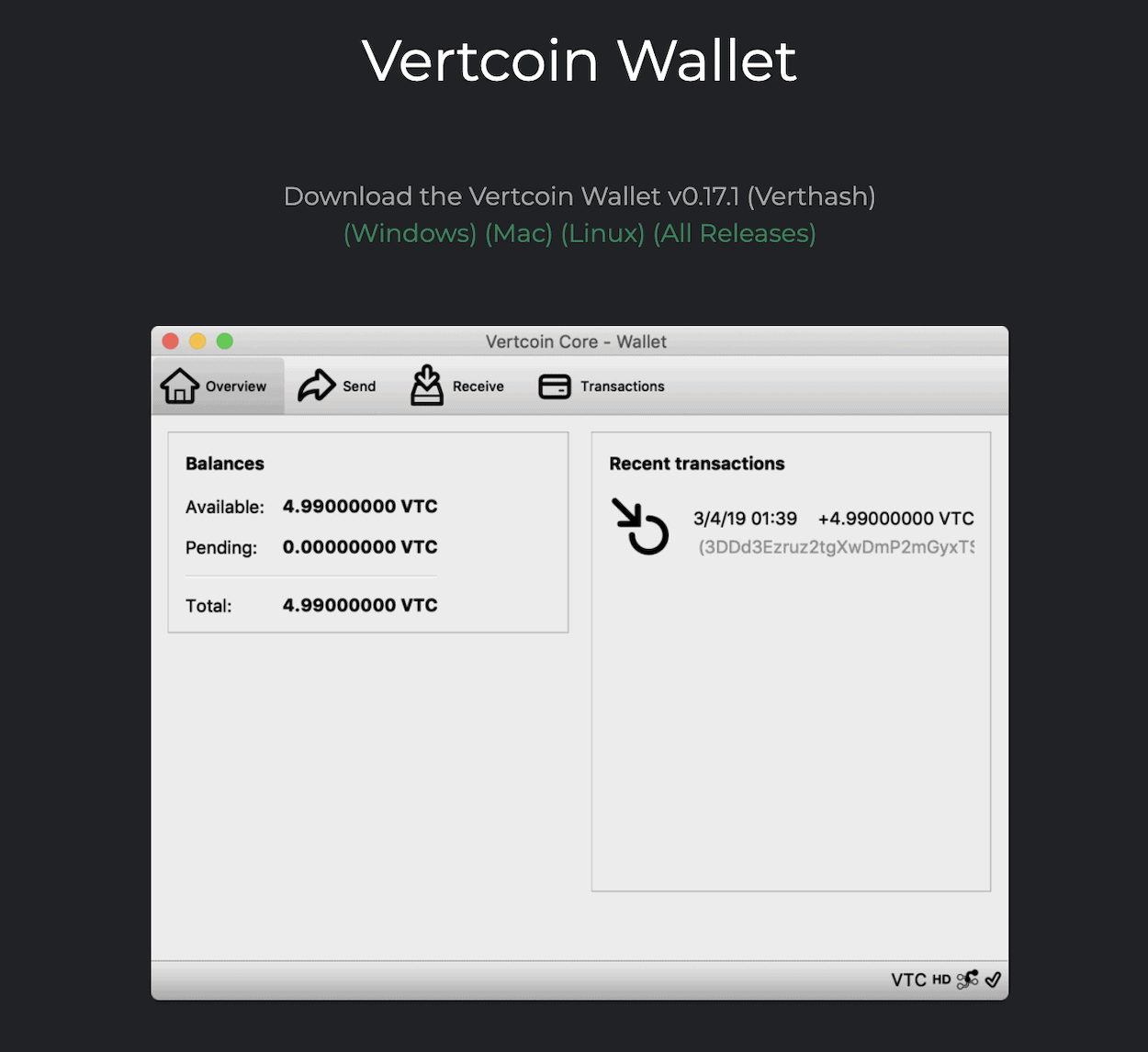 The official Vertcoin (VTC) wallet can be downloaded to a Windows, Mac, or Linux computer.

Alternatively, check out Coinomi. This can be downloaded to a Windows, Mac, or Linux computer – as well as iOS and Android devices. It allows you to store Vertcoin (VTC) and more than 100 other cryptocurrencies.

It’s not mandatory, but hardware wallets remain well-recommended across the crypto-community. This is because they make it simpler and easier to securely store cryptocurrencies like Vertcoin (VTC).

Well, they’re not free. At the time of writing, the cheapest one which supports Vertcoin (VTC) is the Trezor One, which still costs about £43.

Vertcoin (VTC) can be stored on all four of these popular hardware wallets:

I’ve tested each of these options and they’re all decent choices.

It really comes down to your budget, personal preference, and if there are specific cryptocurrencies you’re looking to store using it. For instance, Monero (XMR) isn’t something you can store using the Trezor One.

Thanks for checking out this guide about how to buy Vertcoin (VTC) in the UK!

Check out some of these other popular posts: