LocalCoinSwap is a peer-to-peer (P2P) marketplace for trading cryptocurrencies. It lets you trade directly with other investors using more than 250 payment methods.

But can you trust LocalCoinSwap? Is it the best P2P crypto marketplace?

In this LocalCoinSwap review, I’ll cover the features of the LocalCoinSwap marketplace, take a closer look at how it works, and highlight some of its pros and cons.

Let’s get right to it.

LocalCoinSwap is a Hong Kong-based peer-to-peer (P2P) marketplace where anyone can trade cryptocurrencies directly with other investors.

The firm was founded in 2015 by Nathan Worsley and Daniel Worsley as a private hedge fund. It officially became a crypto trading platform in 2017.

LocalCoinSwap has a number of safety features to protect traders.

But there’s always a risk of getting scammed on a P2P marketplace. That’s why it’s important to vet potential sellers before you send anyone your money.

That said, LocalCoinSwap has never had a successful hacking attempt. This doesn’t guarantee the safety of the platform in the future, but it’s always good to hear.

Additionally, some of LocalCoinSwap’s services are non-custodial, including its escrow and wallet services for Ethereum (ETH) and ERC-20 tokens. However, a personal hardware wallet still offers more security than what you can get with a non-custodial hot wallet.

Whether or not LocalCoinSwap is legal depends on the laws in your country.

LocalCoinSwap is registered in Hong Kong and it doesn’t have offices in the UK. Therefore, it doesn’t have to register as a cryptoasset firm with the FCA (Financial Conduct Authority).

In reality, all LocalCoinSwap does is match buyers and sellers so they can trade crypto. Most countries don’t have laws banning these types of platforms. But some countries require you to register as a financial business if you want to sell crypto on a P2P platform.

If you’re worried that LocalCoinSwap isn’t legal in your area, contact a financial law expert for advice.

LocalCoinSwap is a popular P2P marketplace. But should you trust it?

The company currently has a 4.6* rating on Trustpilot (40+ reviews). This is a high rating for a crypto platform, but it’s based on a small number of reviews.

Approximately 95% of reviewers give LocalCoinSwap a 5* rating. Many reviewers mention that the platform is easy to use and that the escrow system works well. Most reviewers also appreciate that the marketplace has no identity verification requirements.

There weren’t many critical reviews of LocalCoinSwap on the platform, so it’s hard to draw any meaningful conclusions from them. The few reviewers who gave the platform less than 5* mentioned slow response times from customer support – which remains a common issue across the industry.

How Does LocalCoinSwap Work?

LocalCoinSwap is a peer-to-peer (P2P) marketplace where anyone can trade cryptocurrencies without the need for a middleman.

Any trades you make on LocalCoinSwap are done directly with other investors. You’re responsible for vetting any potential traders that you want to work with.

LocalCoinSwap simply provides a platform and an escrow service for your trades.

After that, you need to provide and verify your email address. You also have the option to verify a phone number, but this isn’t required. There are no ID verification requirements to create an account.

But keep in mind that LocalCoinSwap’s customer service team cannot help you recover your password. So, keep it in a safe place or risk losing access to your account.

How to buy crypto on LocalCoinSwap

When you buy crypto on LocalCoinSwap, your first task is to find a reputable seller.

Once you’re on the LocalCoinSwap marketplace, you can filter available offers by selecting:

Then, LocalCoinSwap will show you all listings that meet your criteria. You can sort these offers by popularity or price. The marketplace also lets you hide offers from new sellers.

When you use a P2P marketplace like LocalCoinSwap, you’re responsible for vetting potential sellers. The platform gives you information about sellers in their profiles to help you out, but finding a reputable trading partner is your responsibility.

Some important things to look for when vetting sellers include:

If you’re new to P2P trading, finding your first seller can seem like a daunting task. When in doubt, start with small transactions and stick with sellers that have a long history of successful trades.

How escrow works on LocalCoinSwap

This distinction might seem minor, but it has an impact on the security of your assets. When escrow is non-custodial, it’s very difficult for LocalCoinSwap to simply block your account and run away with your money on a whim. However, there’s always a potential for a bug in a smart contract.

Regardless of which escrow system you work with, the process of placing and releasing funds from escrow on LocalCoinSwap is the same. Here’s what it looks like when you initiate a trade with a seller:

If you have an issue with getting your funds in a trade, you can open a dispute. A resolution manager will then work with you and the seller to resolve the issue.

LocalCoinSwap has its own token called LCS Cryptoshares (LCS). According to the LocalCoinSwap whitepaper, the platform is a community-owned P2P marketplace and LCS tokens represent ownership stakes in the company.

In fact, holders of LCS Cryptoshares (LCS) are entitled to receive dividends from the company. The process for doing so is somewhat complex but you can read more about it on the LocalCoinSwap website.

Additionally, LCS Cryptoshares (LCS) holders get governance voting rights with the company. The firm also states that token holders will be eligible for airdrops of future ICO token listings that are made on the platform.

Users from the UK, the EU, and the US are all able to access the marketplace.

There is no explicit mention of geographic restrictions on the LocalCoinSwap website.

When I checked out LocalCoinSwap, I was able to trade the following cryptocurrencies:

Traders on LocalCoinSwap can choose between 250 supported payment methods when buying and selling cryptocurrencies. Some of the most popular payment methods in the UK include:

LocalCoinSwap charges a number of fees to use its services. Here’s what you need to know.

When you purchase crypto on LocalCoinSwap, you’re trading directly with another person. Because of this, you need to find a buyer that’s willing to sell a coin at a price that you’re willing to pay.

Exchange rates on P2P marketplaces like LocalCoinSwap vary based on your country and chosen payment method. Most exchange rates on the platform are higher than what you’d get on popular cryptocurrency exchanges like Coinbase Pro, but you can sometimes find offers for less than a coin’s current market value.

Something I appreciate about LocalCoinSwap is that it shows you how much higher or lower an offer price is than the current market rate. As you can see in the image below, some exchange rates on LocalCoinSwap are reasonably competitive while others are substantially higher than the exchange rate. 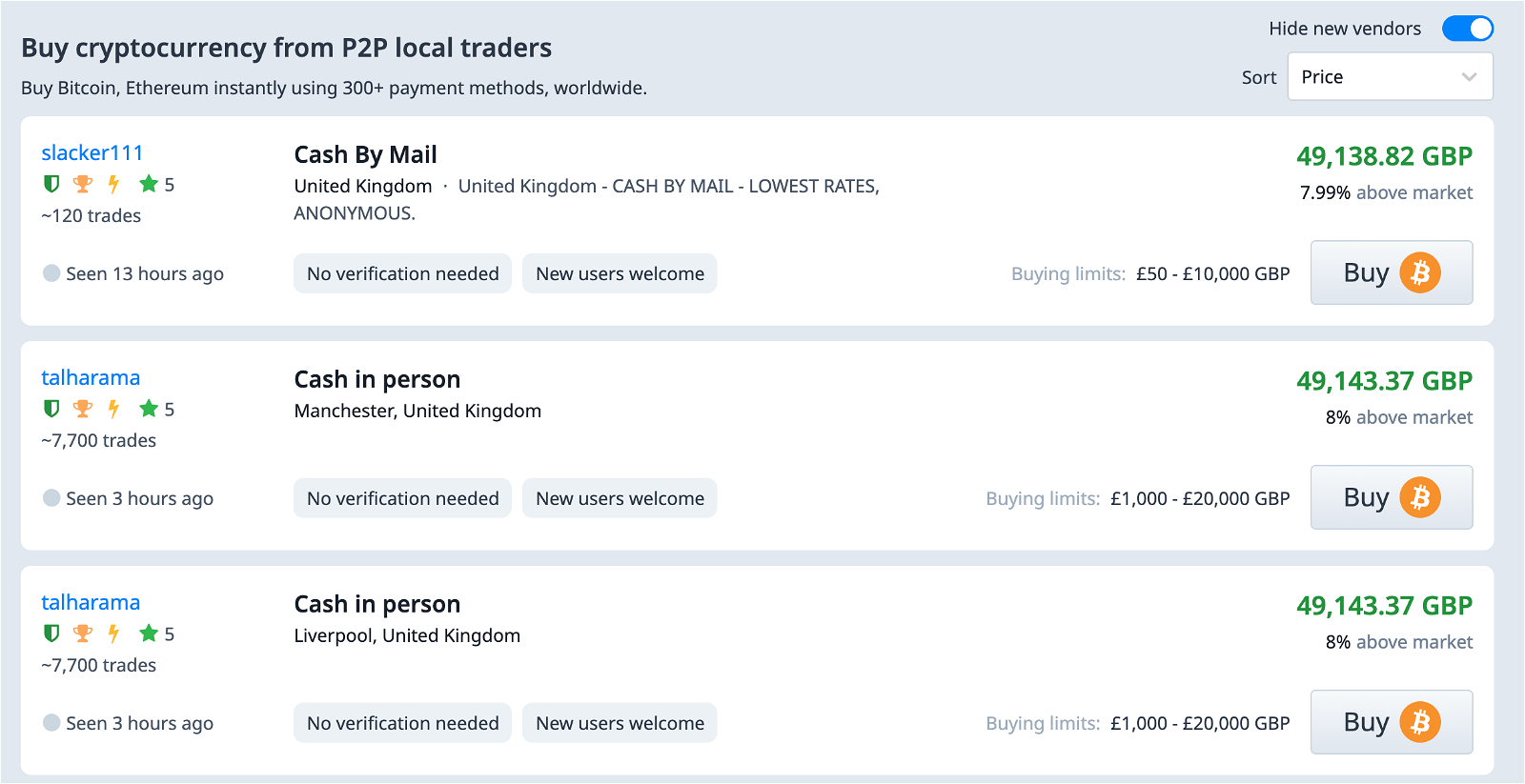 When I checked, there were offers for about 8% over the market rate when if you wanted to pay with cash. Meanwhile, exchange rates for bank transfers and other payment methods, like PayPal tended to be higher (see below). 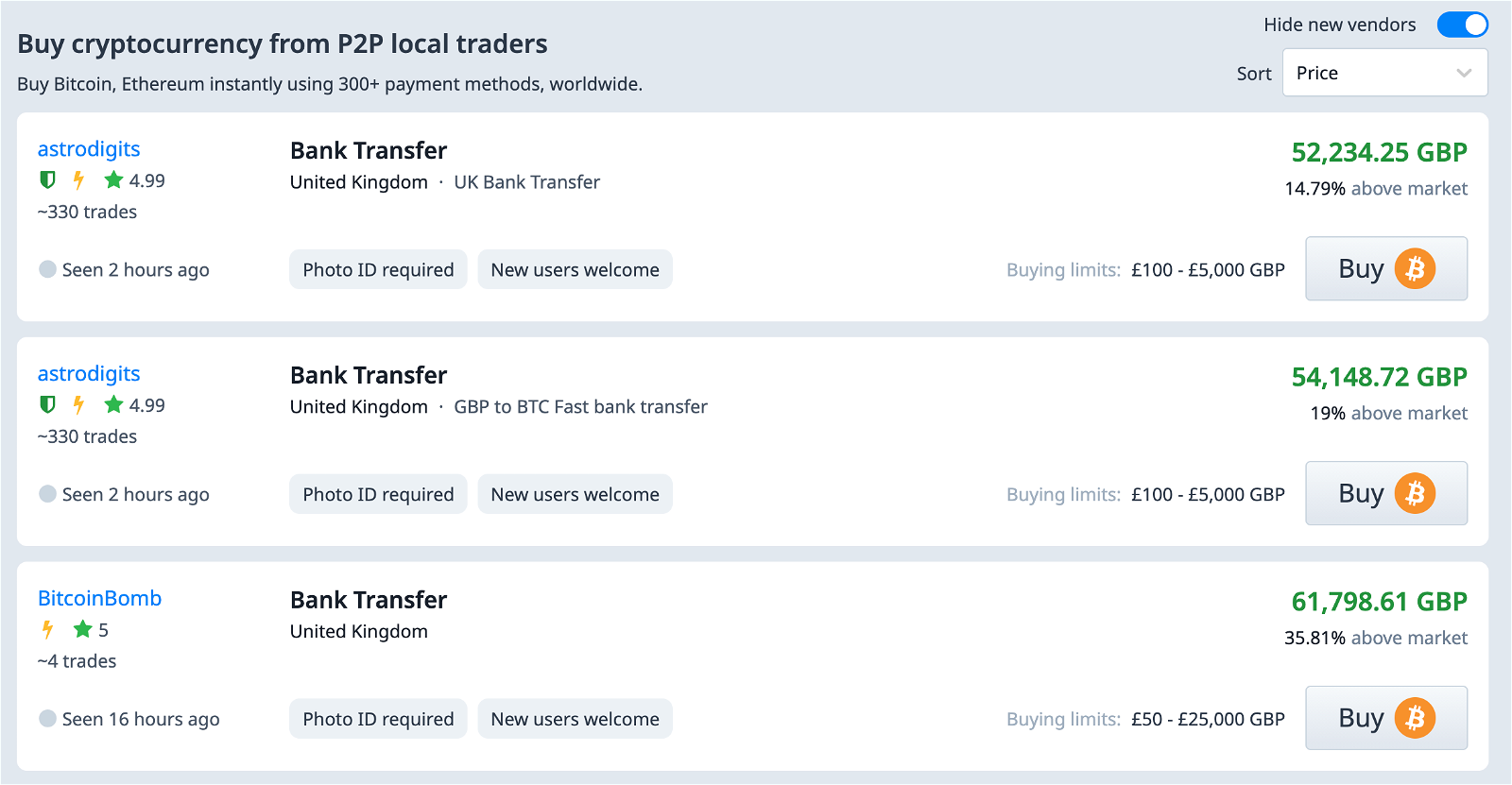 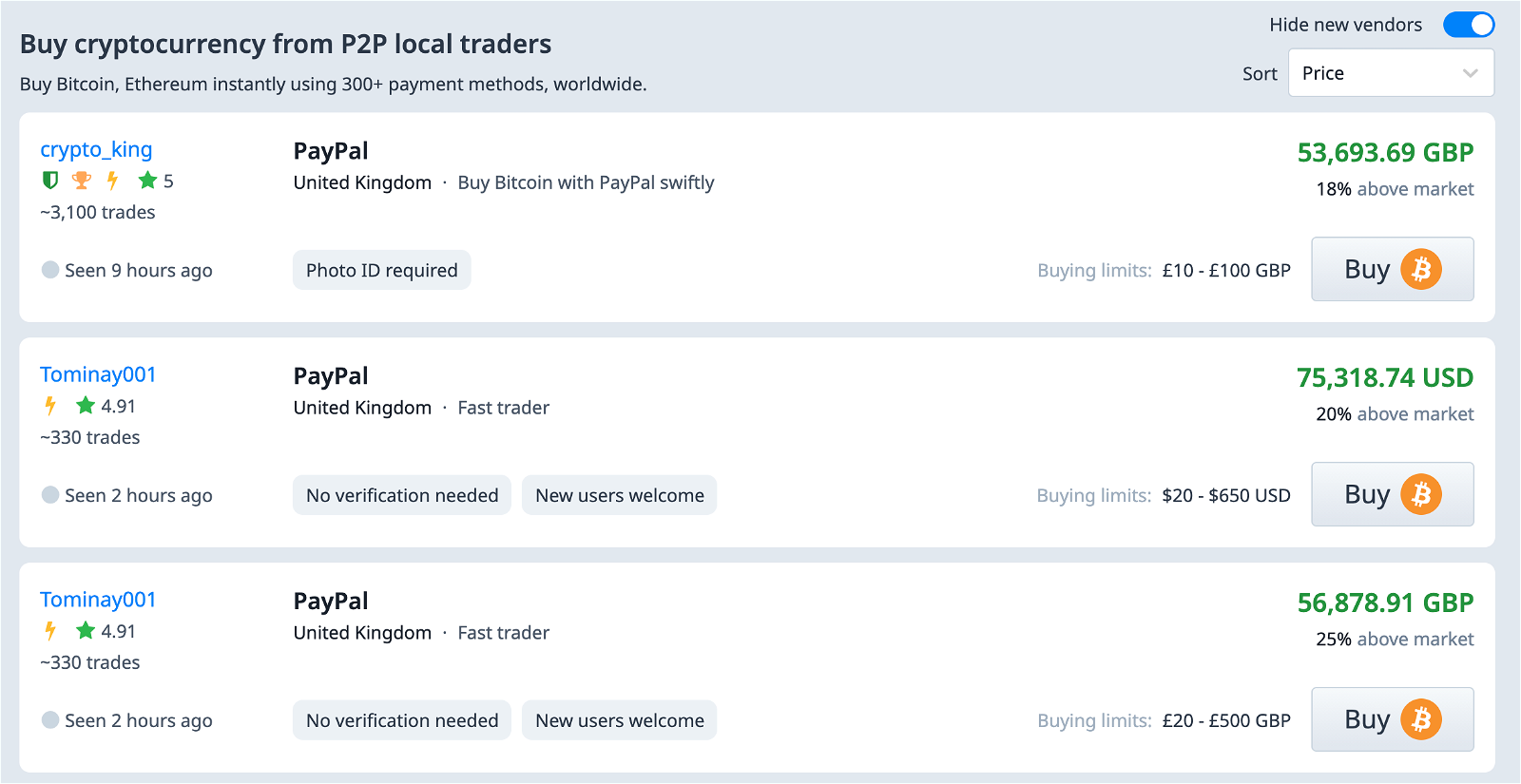 The exchange rates on LocalCoinSwap change all the time depending on what offers are available. So, it’s hard to generalise and compare the prices you see on the platform to that of other P2P marketplaces.

However, most of the prices LocalCoinSwap offers in the UK seem to be quite a bit higher than on other marketplaces like LocalBitcoins and LocalCryptos. Always do your research before committing to a trade to ensure that you’re getting the best value for your money.

Trading fees are straightforward with LocalCoinSwap.

If you create a listing, you’ll pay 1% on each completed trade. There are no trading fees if you respond to listings.

LocalCoinSwap charges withdrawal fees for some cryptocurrencies. These include:

Additionally, there are gas fees associated with sending ETH and ERC-20 tokens to escrow, but these are decided by the network, not LocalCoinSwap.

You can buy and sell as much as you want on the platform without having to complete any sort of identity verification.

LocalCoinSwap uses a number of security features to protect your account from hackers.

In particular, 95% of Bitcoin (BTC) and Dash (DASH) held in LocalCoinSwap wallets are placed in offline cold storage. Outgoing transactions from the firm’s cold storage also require manual verification from the LocalCoinSwap team.

Founded in 2012, LocalBitcoins is one of the world’s oldest P2P crypto marketplaces. And while the two firms share many similarities, there are also differences in how they operate.

The following table highlights some of the primary differences between LocalCoinSwap and LocalBitcoins:

For a more thorough overview, check out my review of LocalBitcoins.

LocalCryptos is another alternative to LocalCoinSwap. 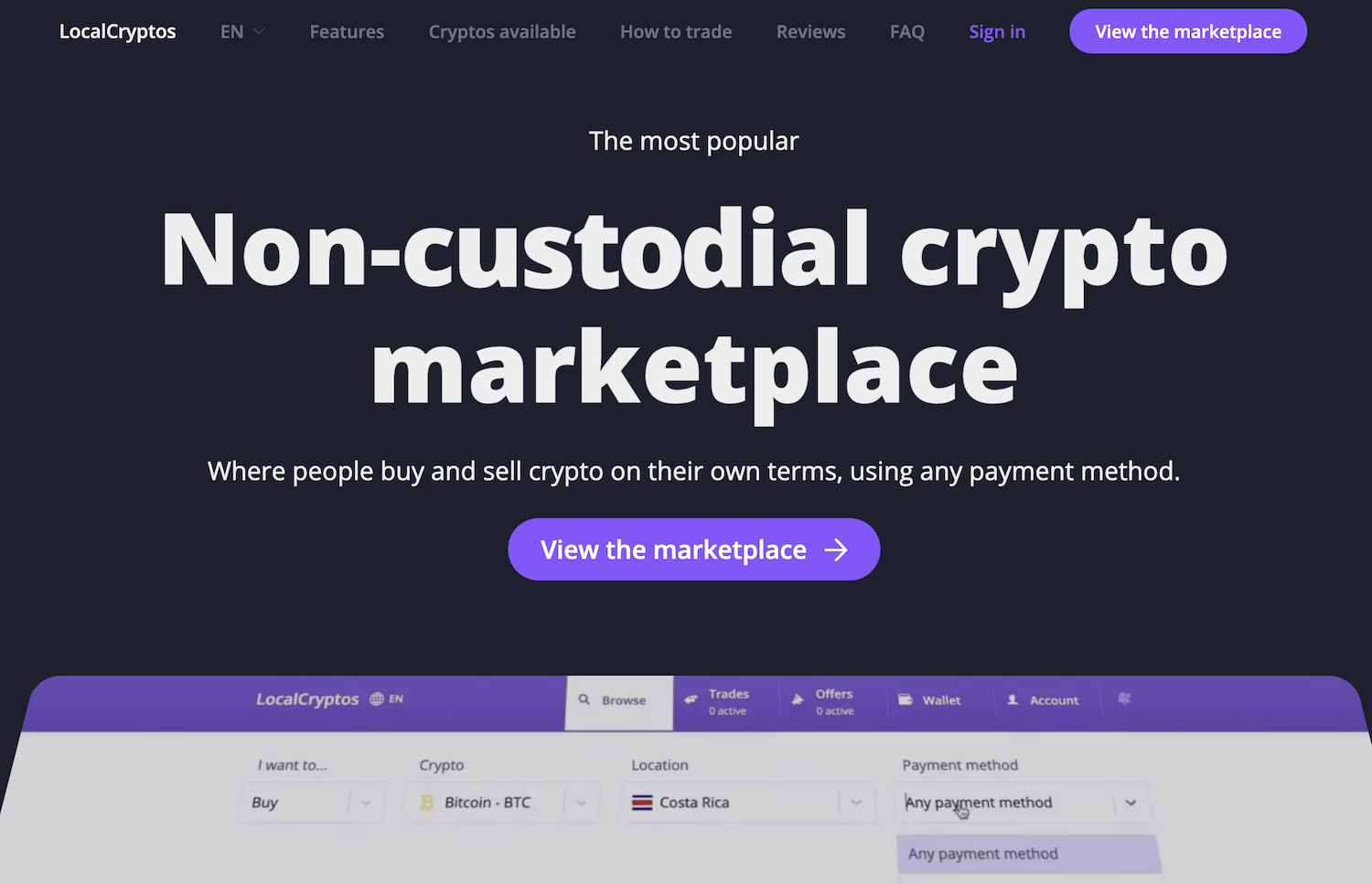 This is another P2P marketplace that lets you trade crypto using dozens of payment methods. It has fewer supported cryptocurrencies than LocalCoinSwap, but its escrow system is fully non-custodial. The platform also has no ID verification requirements.

Check out my LocalCryptos review for more details.

Paxful is another LocalCoinSwap alternative.

With Paxful, you can use over 300 payment methods to buy Bitcoin (BTC) and Tether (USDT). There are no identity verification requirements on Paxful, either, but fees can be as high as 5%.

Check out my Paxful review for more details.

Yet another option is Bisq. 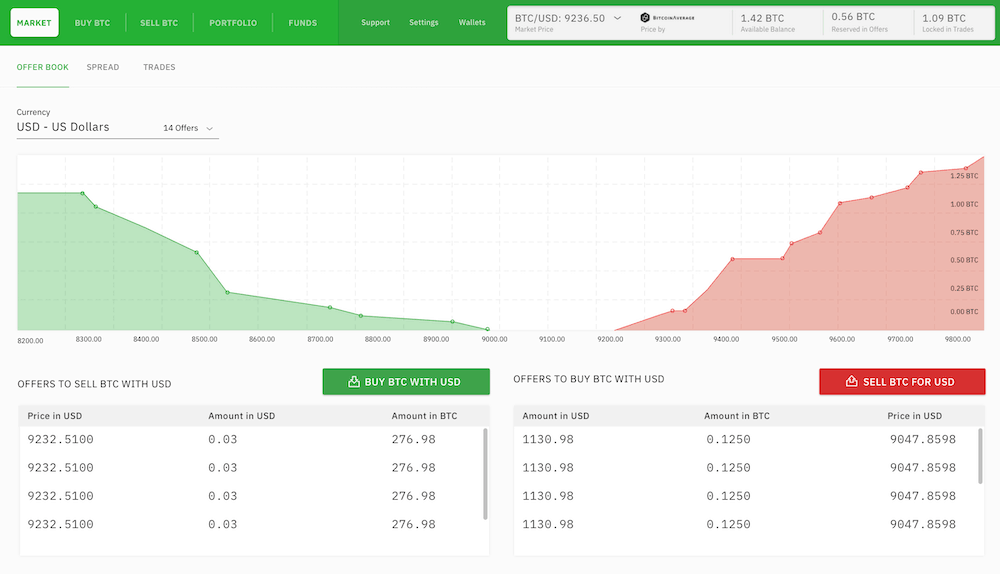 Bisq is a fully decentralised P2P platform. There are also dozens of supported coins on the marketplace. However, there are fewer dispute mediation options available with Bisq because there’s no central authority overseeing the marketplace.

LocalCoinSwap isn’t as well known as some other P2P marketplaces.

However, here are some aspects of LocalCoinSwap that I really liked:

But one big downside is that the exchange rates you’re quoted (for various payment methods) don’t seem as competitive as you’d find in alternative P2P marketplaces (e.g., LocalBitcoins).

Want to find out more about it? Head over to their website now.

Thanks for checking out this LocalCoinSwap review!

Have a question you can’t find the answer to?