Paxful allows you to buy Bitcoin (BTC) with a crazy amount of payment options in the UK (>300). Registration takes a few minutes and the interface is intuitive and easy to use too.

Bitcoin rates start at 3% above the real BTC to GBP market rate. As Paxful expands into the UK and Europe, I’d expect the rates to become more competitive.

What is Paxful? How does it work? Is it legit and safe to use?

To clear this up (and more), I’ve put together this in-depth Paxful review. I’ll cover the basics of what Paxful is all about, how it works, supported countries, how competitive its fees are, and more.

More precisely, here’s what we’re going to cover in this Paxful review (click any section to jump to it).

Paxful describes themselves as “Paypal + Uber and the peoples’ Wall Street”. It allows you to buy and sell Bitcoin (BTC) with a huge number of payment methods in a peer to peer manner. It’s quite unlike Solidi, Bittylicious, or brokers like that.

Paxful is a US-based company which was founded by Ray Youssef and Artur Schaback in 2014. They’re not a small company either, with more than 200 employees spread across their offices in the US, Hong Kong, Estonia, and the Philippines. They have more than 2 million registered users across the world.

It was disappointing to see they had such a poor Trustpilot rating. At the time of writing, it’s 2.5 out of 5 (with more than 850 reviews). From the most recent ones, a lot of the negative reviews are about being banned or suspended (with no resolution from support). I’ll touch on this more later in this Paxful review.

How Does Paxful Work?

Paxful is a P2P marketplace where you can directly buy and sell Bitcoin (BTC) with anyone.

To get started, you’ll need to create an account. No ID verification is required at this stage, so this takes less than a couple of minutes. Once you’ve created your account, it’s quick and easy to find someone to buy from.

Paxful provides an escrow service for all trades that take place on their platform. This is a compulsory component of the trade, which holds the seller’s Bitcoin (BTC) until both parties have confirmed that the payment has been made. If both parties agree that the payment has been made, then the buyer will automatically receive the escrowed Bitcoin (BTC).

If the buyer doesn’t pay within the defined time period, then the trade is cancelled and the escrowed Bitcoin (BTC) is returned to the seller.

If either party does not agree that the payment has been made, then the escrowed Bitcoin (BTC) will not be released. It’ll be escalated to a dispute which will then be investigated by Paxful. They’ll consider the case put forward by both parties and release the escrowed funds to the person they believe they belong to.

You won’t have a problem with most people, but it’s good that something like this is built-in.

Paxful is available in nearly every country around the world (incl. the US, Canada, UK, and Europe).

As a US organization, Paxful needs to comply with the Office of Foreign Assets Control (OFAC) sanctions. This means that users in the following countries cannot use Paxful.

Paxful only supports the buying and selling of Bitcoin (BTC) on its platform.

That’s a crazy amount of ways to buy Bitcoin (BTC).

Unless you’re trading on an exchange (e.g. Coinbase Pro, Bitstamp, or Kraken), you’re going to pay fees which are above the real BTC to GBP exchange rate (i.e. the mid-market rate).

You can check the real market price of Bitcoin (BTC) in GBP with something like this. But kudos to Paxful, they actually show the current market price above the open offers (which is accurate).

Paxful doesn’t set the rates offered on its platform. The individual sellers can choose how much they’d like to sell their Bitcoin (BTC) for, and it will vary on a day-to-day basis.

What fees do you pay if you’re looking to sell Bitcoin (BTC) on Paxful?

For the majority of payment methods, sellers on Paxful are charged a 1% fee.

The only exception is iTunes and Google Play gift cards, where sellers are charged a 5% fee.

You can find more information here.

Are there any buying limits on Paxful?

Buying limits are independently set by each seller. When you’re browsing offers, you’ll see them displayed in the highlighted column. There isn’t an upper threshold that I’m aware of.

When I checked, the cheapest payment method available was a UK bank transfer. The best offer using this payment method was about 2.9% above the real BTC to GBP exchange rate.

Here’s how that stacks up against some alternatives.

As Paxful gets more UK liquidity, I’d expect these rates to go down and align with what’s available on Localbitcoins.

Buy Bitcoin with PayPal (on Paxful)

I checked out the best offers on Paxful for PayPal offers too. The cheapest option I found was 25% above the real BTC to GBP exchange rate. Ouch! That’s quite a mark-up.

When I checked Localbitcoins, the cheapest option I found was 10% above the real BTC to GBP exchange rate. That’s quite a lot cheaper!

Is Paxful Legit? Is Paxful Safe?

Like on Localbitcoins and other P2P cryptocurrency marketplaces, there’s a good chance that someone will take advantage of you if you’re not careful.

Here are some tips:

Unfortunately, the Trustpilot rating of Paxful is quite negative. It didn’t use to be this way, but it looks like they’ve received a number of complaints about accounts being banned or suspended. Paxful will suspend or ban accounts if users breach their terms and conditions (e.g. scamming others or facilitating illegal activity).

Localbitcoins is another Bitcoin (BTC) P2P marketplace which was founded in 2012. It’s popular around the world and supports loads of different payment methods – just like Paxful.

On the surface, I don’t think there’s much difference between them.

There are the main differences between the two:

You can buy Bitcoin (BTC) with an insane number of payment methods on Paxful. If that’s important to you, then it’s definitely a marketplace you should check out. Since writing this review, they’ve also improved the interface so that it’s even easier to use and clearer what markup is being charged when you’re selecting a seller.

But if you’re looking to buy Bitcoin (BTC) with a UK bank transfer, there are alternatives in the UK where you can find better rates (check out this thread for an overview).

I hope you found this Paxful review useful. Thanks for reading!

Get Started with Paxful

Have a question about Paxful?

Let me know in the comments section below and I’ll get back to you ASAP. 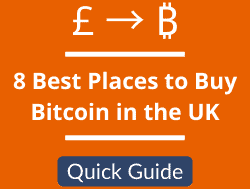