The SecuX V20 is a hardware wallet that’s designed specifically for long-term crypto storage. It offers one of the largest full-colour touchscreens that I’ve ever seen on a hardware wallet and it supports well over 1,000 cryptocurrencies.

But is the SecuX V20 truly a secure option for your HODLing needs?

In this SecuX V20 review, I’m going to walk you through everything that this wallet has to offer. I’ll discuss the SecuX V20’s features, pros, and cons, to help you determine if it’s a suitable choice for your crypto.

Use coupon code “quickpenguin” to get 15% off the SecuX V20, W20, W10 hardware wallets and XSEED products.

Although this isn’t exactly cheap, the SecuX V20 is reasonably priced when you compare it to other top hardware wallets. This is especially true when you consider that one of the only other major hardware wallets with a touchscreen – the Trezor Model T – costs a whopping US$260 (£198/€235)!

Here’s a quick look at how the SecuX V20 compares to other leading hardware crypto wallets:

You can get the SecuX V20 from the SecuX online store, Amazon, and other authorised resellers.

Before you order a SecuX V20, there’s one important thing that I want to point out: shipping fees.

If you buy from SecuX’s official store, you’ll have to pay to ship your device to the UK.

That’s nearly half the price of the wallet itself or the exact cost of a Ledger Nano S. You might also have to pay customs duties and taxes when your wallet arrives in the UK. Not good.

The good news is that you can order the SecuX V20 from Amazon and other retailers in the UK, which can save you a lot in shipping fees. Just be sure to do your due diligence to ensure that no one has tampered with your wallet if you purchase from a third party seller.

The SecuX V20 supports over 1,000 coins and tokens, including most major cryptocurrencies like:

SecuX also states that the V20 can support hundreds of ERC-20, TRC-10, TRC-20, and BEP-20 tokens. Check out the full list of the SecuX V20’s supported coins and tokens for more information.

The SecuX V20 comes in a compact box that’s wrapped in clear plastic as a security measure. It also includes a set of tamper-evident security seals so you can verify whether someone tried to mess with your wallet before it arrived.

Inside the box, you’ll find:

The wallet itself also features a security seal over its USB-C port, which serves as another layer of protection against fraudsters.

But I’m not sure how useful this seal actually is since it’s designed to be removed fairly easily. Ultimately, it’s a nice touch, but you’ll still want to do your due diligence to ensure that your device hasn’t been tampered with before you start using it to store your cryptocurrency.

If there’s one area where the SecuX V20 stands out in an increasingly busy market of crypto hardware wallets, it’s in its physical design.

If you weren’t planning on carrying the SecuX V20 around in your pocket, then this large size might not be an issue. But it certainly means that this wallet is not your go-to for everyday carry.

The large size of the SecuX V20 might be a non-starter for some crypto enthusiasts, but it’s built this way for a good reason, namely so that it can have a huge touch screen.

With the V20, you get a 7.1 x 7.1 cm LCD full-colour touchscreen, which is absolutely massive by crypto hardware wallet standards.

For comparison’s sake, the iPhone 13 mini has a 13.1 x 6.4 cm screen. So the screen on the V20 is nearly half the size of that of a proper smartphone. This should give you an idea of how much easier it is to read wallet addresses on the SecuX V20 than it is to read them on the 3.4 x 1.7 cm display of the Ledger Nano X.

Plus, the screen of the SecuX V20 is a full-colour touchscreen, so that means you don’t have to fiddle around with any funky buttons. Just use your finger to press on-screen buttons or type in your PIN and you’ll be able to send and receive crypto with your V20. That’s pretty awesome.

As far as durability goes, I’m pretty impressed by what I see from the SecuX V20.

Unlike many hardware wallets, which are made from plastic, the V20 features a brushed aluminium case – so it’s about as sturdy as it gets.

Since the V20 has a touchscreen, there also aren’t as many buttons on the device that could break over time. That said, the touchscreen on this wallet is quite large – so you’ll need to be careful to avoid getting any scratches on it. 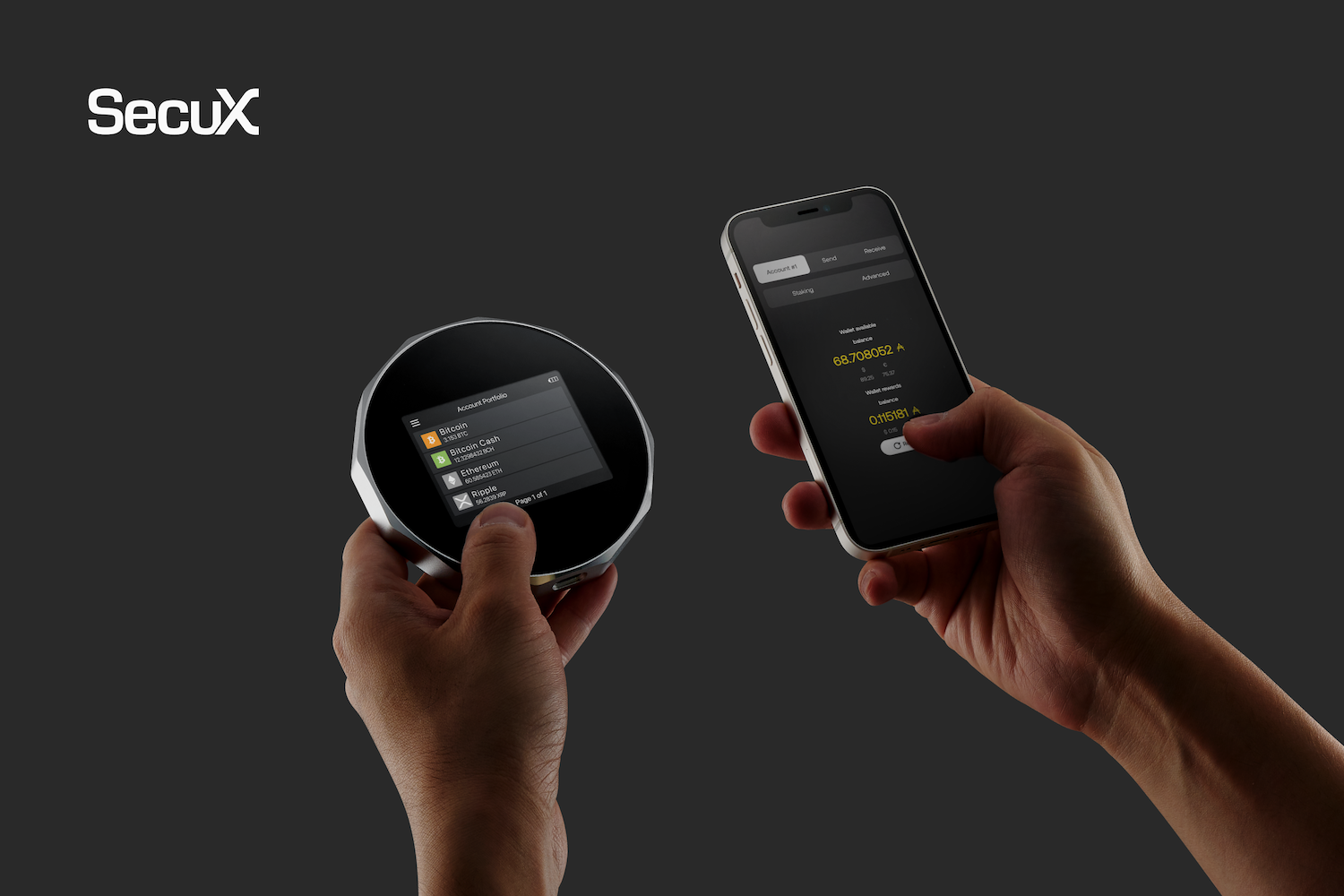 As the SecuX V20 is a hardware wallet, the device itself is designed solely to store the private keys to your crypto. The V20’s large touchscreen also lets you view your crypto balances. But to send coins or access your wallet addresses, you’ll need to connect to ​​SecuXess, which is SecuX’s official wallet interface.

You can access the SecuXess wallet interface either online or in a mobile app (iOS and Android). Admittedly, the SecuXess mobile apps are still in the early stages of development, so some users have found that they’re a bit buggy.

But the large size of the SecuX V20 probably means that you’re not going to carry it around and use it on the go anyway, so you’re more likely going to use it with your computer. You can connect your wallet to the SecuXess interface on your computer using the included USB-C cable or Bluetooth.

The SecuXess wallet interface is fairly simple, but it lets you see your holdings and send crypto. You can also create up to 500 sub-accounts in your wallet if you want to organise your funds for different purposes (e.g., HODLing and spending).

Within the SecuXess wallet interface, you can also access WalletConnect, which is a third-party service that integrates dozens of wallets with popular decentralised apps (DApps). This is pretty awesome, especially if you wanted to stake coins or trade on decentralised exchanges (DEXes) right from your wallet. 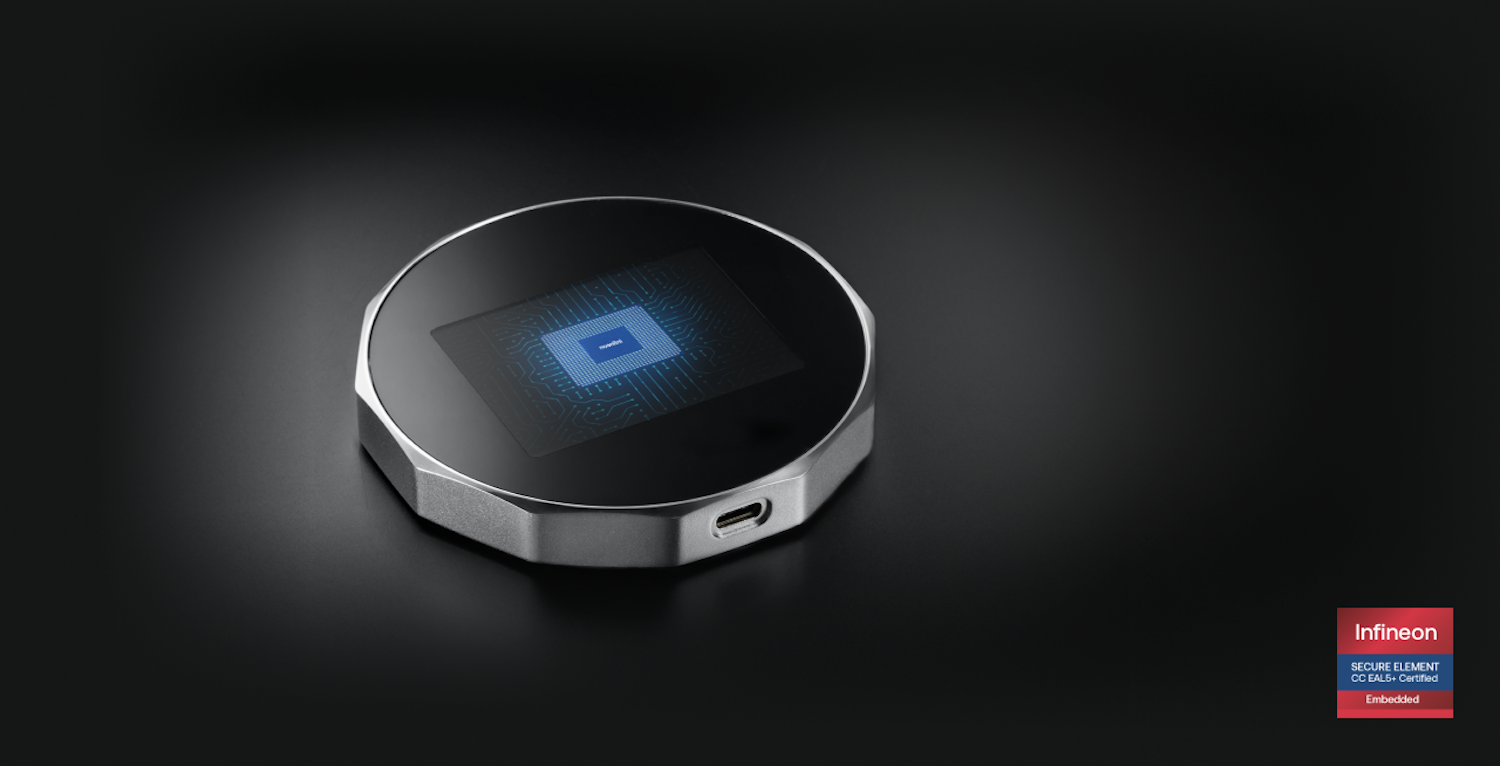 SecuX markets the V20 as having “vault-grade security”. While that’s not exactly a very standardised metric for measuring security, there are a few awesome security-related features on the V20.

Some of the most notable security features on this wallet include:

While these are some pretty sweet security features, I should point out that the SecuX V20 does not operate on open-source software – which is a bummer. The wallet itself also doesn’t have any support for multi-sig transactions, so it’s somewhat limited for certain security-conscious crypto enthusiasts.

If you like the idea of a crypto wallet with a touchscreen, but you don’t think the SecuX is the right choice for you, consider the Trezor Model T instead.

The Trezor Model T is a premium hardware wallet from Satoshi Labs that also features a full-colour touchscreen. While the Model T’s touchscreen is much smaller than the V20’s, the Model T runs on open-source software and it’s made by a more established company. It also has a very powerful wallet interface, though it’s substantially more expensive than the V20.

You can find out more in my Trezor Model T review.

For a cheaper, yet equally powerful, alternative to the SecuX V20, the Ledger Nano S is a solid choice.

I like the Ledger Nano S because it’s available for just a fraction of the cost of the V20 but it’s much more portable. It’s also one of the most widely supported hardware wallets among DApps and DEXes, so it’s a nice option if you want to stake or swap tokens. Plus, the Ledger Live wallet interface is one of the best in the business.

Find out everything you need to know about it in my Ledger Nano S review.

The SecuX V20 is a relative newcomer to the world of hardware crypto wallets, though it offers something that’s hard to find elsewhere: a large, easy-to-read full-colour touchscreen.

There are a few features that I love about the V20, including:

I’m not a huge fan of the V20’s lack of open-source software, and it’s easily one of the heftiest hardware wallets out there. The SecuXess wallet interface is also pretty basic and the mobile app is somewhat buggy.

Use coupon code “quickpenguin” to get 15% off the SecuX V20, W20, W10 hardware wallets and XSEED products.

But what are your thoughts on the SecuX V20? Is the wallet’s huge touchscreen enough to convince you that it’s worth a try?